In all jobs and occupations there are ups and downs. There are parts of the work that make your heart sing and there are parts that can feel like trudging through mud. The muddy moments, for me, include the lonely schedule of bouncing from one project to another with no real opportunity to interact with colleagues, the Monday mornings when the world has wound itself back up to another week of work while I sit alone and plan for the week ahead, and the occasions where I let the fear of financial shortfall push me to accept projects that don’t sit well with my values or style of work.

But this past fortnight has been a heart-singing time. I have spent the last two weeks working on Summer Academy at the Citizens Theatre. For two weeks, I have had a fairly set, normal schedule. I have had a group of colleagues to share the experience and life with. I have had an opportunity to really push myself, test new waters and lead a group of 9-12 year olds on a journey that has challenged them and opened their eyes, hearts and minds to something new. It’s times like these that remind me why I persevere through the muddy moments.

The theme for this year’s Summer Academy was “Shakespeare.” And as my co-leader, Carly, and I discovered in our first planning meeting, that’s a pretty wide and rich theme. There were too many ideas. We discussed and mind-mapped and researched and both agreed that we wanted to challenge the group to use the Shakespearean language and to find the joy that comes with discovering the story, learning the language, and finding its relevance in our modern world. And so we entered the first day of Summer Academy with a collection of extracts – from Act 2 Scene 1  and the epilogue of A Midsummer Night’s Dream, and the prologue and Act 1 Scene 1 of Romeo and Juliet – and a number of provocations and exercises to get the group thinking and discussing what they thought about Shakespeare and his work. 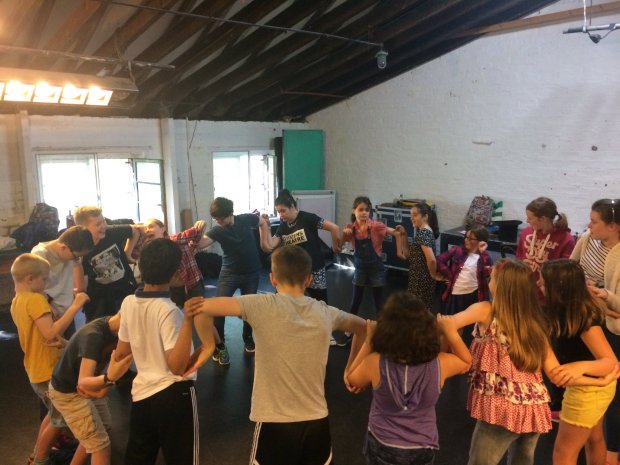 From the get-go the group embraced all that we presented to them. They entered whole-heartedly into discussion and debate. They wore their hearts on their sleeves and they trusted and supported each other to express their opinions and question everything that was thrown at them. Some simple Boal exercises unlocked not only a wealth of interesting conversation, but a physical language that became the lifeblood of our final piece. At every turn they surprised us and challenged us to expect more of them, to take the leap and to push forward with the language and movement without compromising.

Week two brought a change in mood. There is always a transition from week one to two: for the staff it is the transition from facilitator to director, for the participants its the transition from workshopper to actor. It’s a big shift for everyone and it was particularly difficult this time around. As we began to shape all of the work of week 1, it seemed the young people were disconnecting from the story that they had created, so much of their physical language seemed to have regressed, the language started to sound like a school assembly script that had been learned by rote. We began to wonder if we had leapt a little too far.

On the penultimate day we had our first full run of the piece in the studio where it was to be performed and it was a mess from start to finish. Our tech session followed, in the last hour of the day, by which point our cast resembled a galaxy of starfish littered on the studio floor. It was at this point that I was aware of  my training kicking in. Of course I had been using skills that I had learned from my studies throughout the fortnight, but in that moment of fight or flight, subconsciously, all that was learned in my Masters studies came bubbling to the fore. Don’t direct acting during tech; get from cue to cue and go over each cue until they are right. Don’t lose your nerve; when it seems that your piece is falling apart at the seams, hold your nerve and bring it back together. Trust your instincts.

Our group arrived on performance day at the later start time of 10am, brighter-eyed and bushier-tailed than we had seem them for a while. We spent an hour or so working specific notes – problem areas that needed attention. We worked at remembering the story we were telling and who was telling it when. And then it was into costume and into the space. Our young cast were given the final elements they needed to take the ultimate leap. As they donned their costumes and had their make-up done, a transformation took place, this group of young people became a band of sprites and fairies ready to tell their story.

Carly and I squealed our way through the dress run as they committed fully to section after section, as they rose to the challenge and told their story with the skill and maturity of actors beyond their years. They raised their game further still in front of their audience. We had the joy to witness the pride and accomplishment on their faces as they had a ball sharing all that they had worked so hard on.

Saying goodbye to our 18 little spirits was hard. The mix of elation and sadness that follows these projects is hard to describe. I have replayed the performance several times over, celebrating the moments of magic, analysing the sections that I wish we had had the opportunity to push further and reflecting on the process. At Easter Academy I was reminded of how life-changing these projects can be for the participants and how the memories will stay with them for many years. During this Summer Academy it’s not just the participants who are changed by the process, but Carly and I too. I have been inspired by this group of young people to raise my expectations, to go after the projects that make my heart sing and to trust in the power of a story to capture imaginations no matter how complex the language. Anything is possible if it is facilitated well.